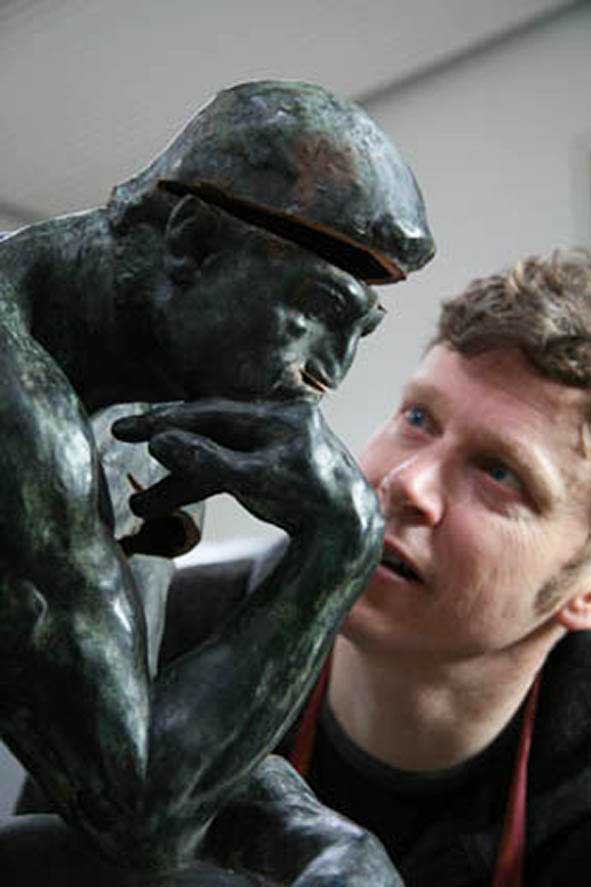 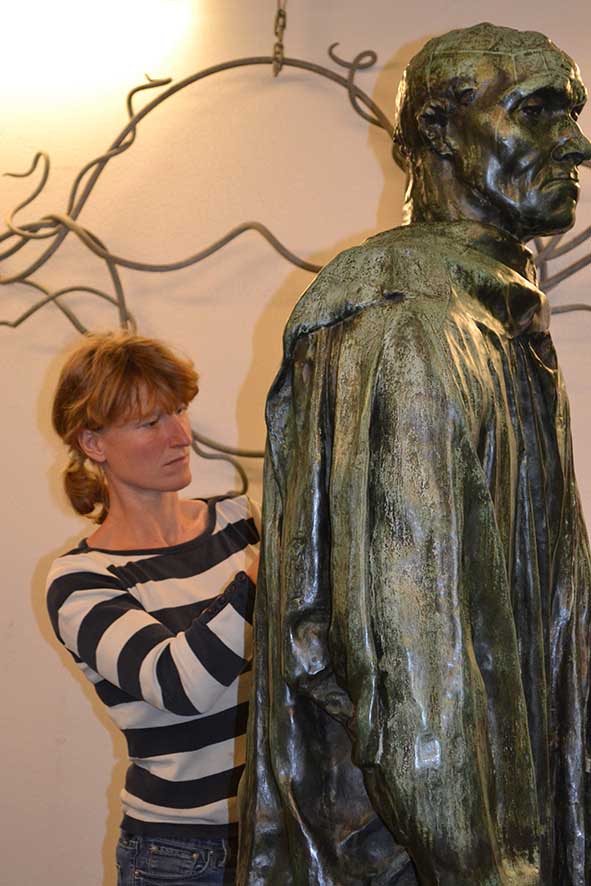 The company Beentjes-Veenemans vof was founded in 2007 and focuses on the restoration and preservation of metal art objects. The company is led by Tonny Beentjes and Vivianne Veenemans. They have both been active as professionals in the field of metal conservation since 1995, working closely with various museums and institutions. They are both graduated goldsmiths, metal conservators and gemmologists.

Tonny Beentjes started his career in 1996 as Head of the Conservation/Restoration of Fine Metalwork programme at the prestigious institute West Dean College in England. In 2006 he became Head of the Metal Conservation Programme at the University of Amsterdam. He also conducts research on metal history, for which he recieved a Samuel H. Kress Fellowship in 2007.
In 2010 he was the main executor of the restoration of the Thinker by Rodin. This bronze statue was heavily damaged, after being stolen from the garden of the Singer museum in Laren, Netherlands. This project of the damaged Thinker got a lot of media coverage, also for the fact that the most advanced technology was used for its restoration.

Vivianne Veenemans has always been a self-employed metal restorer, and is specialised in jewellery conservation and restoring bronzes, including model making of missing parts. She also participates on a regular basis in conservation projects for museum collections. She is a graduated Fine Arts Historian, for which she studied in England.

Thanks to years of experience and wide expertise, in combination with the many contacts within the area of restoration, Beentjes-Veenemans is able to give you the most up-to-date consultation for metal restoration and conservation.
In addition advice is also given for (passive) conservation of metal art objects, and instruction days can be given to museum staff for conserving the metal objects within the collection.

Which metal objects do we restore?

We are often asked this question. Our expertise covers almost all metals: precious metals, such as gold and silver, and base metals such as brass, tin, bronze, zamac, zinc, iron, steel, aluminum, etc.
With regard to the type of objects, it is also virtually all-embracing. From furniture fittings, kitchen utensils, jewellery, sculptures, candlesticks, to wrought-iron fences.

We think it is important to maintain excellent communication with our clients. You will always be informed on the whole process and the projects will be finished within the agreed term. 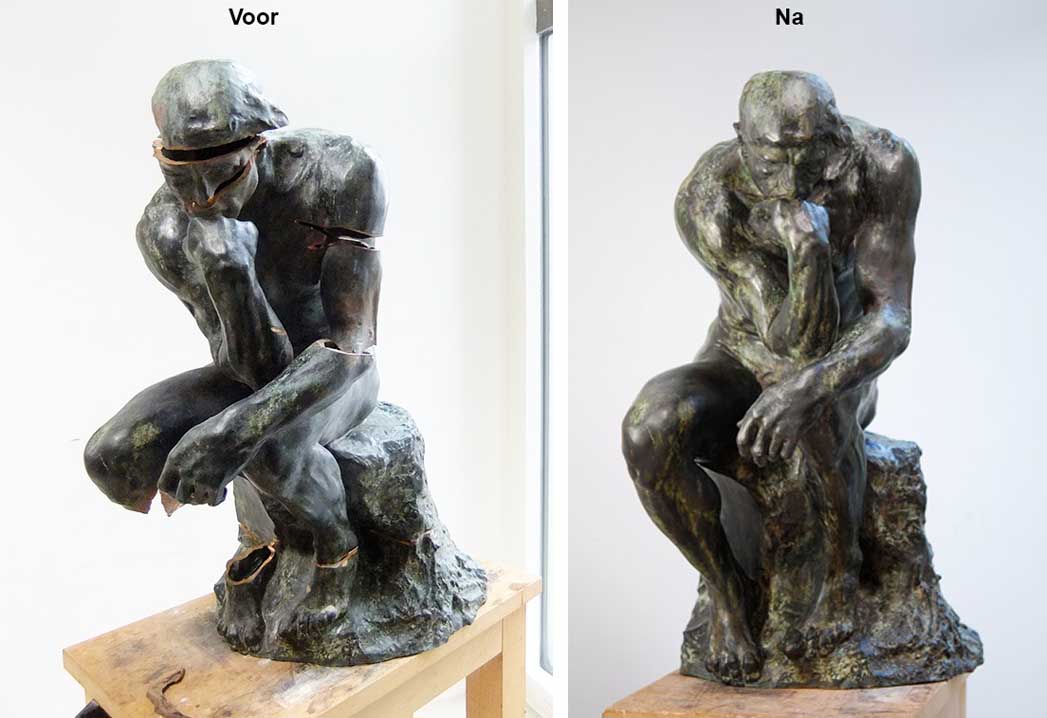 Tonny Beentjes was the main restorer of the heavily damaged bronze statue of the Thinker by Rodin, of the Singer museum in Laren. This restoration involved the use of 3D-scanning and stereolithography prototyping technology. The combining of these two technologies for restoration had not been done yet in 2010 and has been succesfully applied. 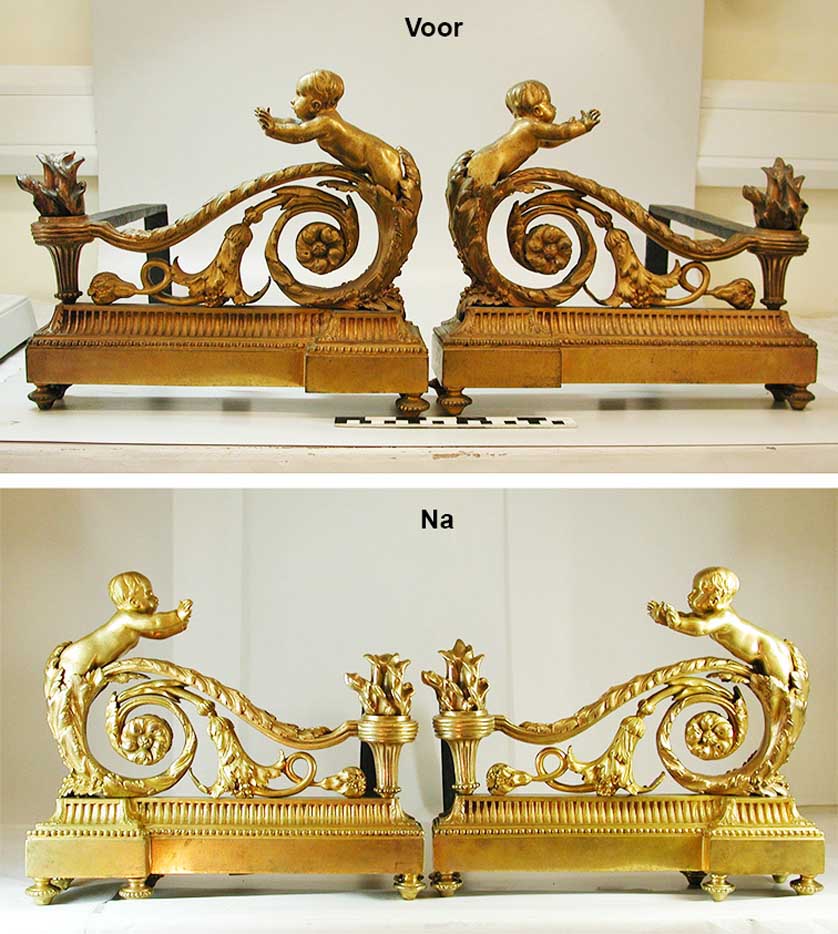 Through years of experience and extensive expertise, Beentjes-Veenemans is able to give you the most up-to-date consultation on metal restoration. In addition to providing advice for metal restorations, advice is also given for (passive) conservation of metals, and instructions can be given to museum staff for the maintenance of the metal objects within the collection. 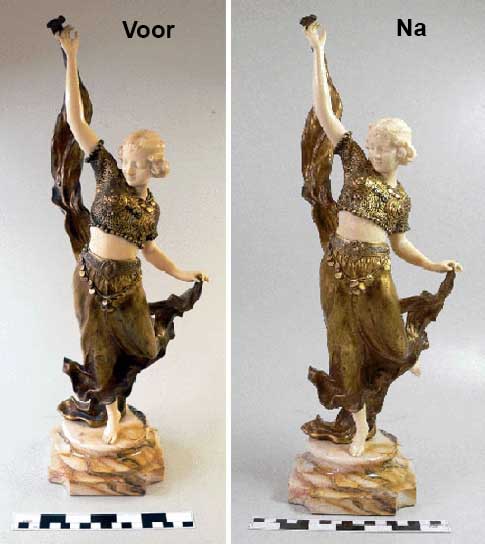 we can restore fine objects, comprising of other materials besides metal, such as this bronze and ivory Art Deco figurine. 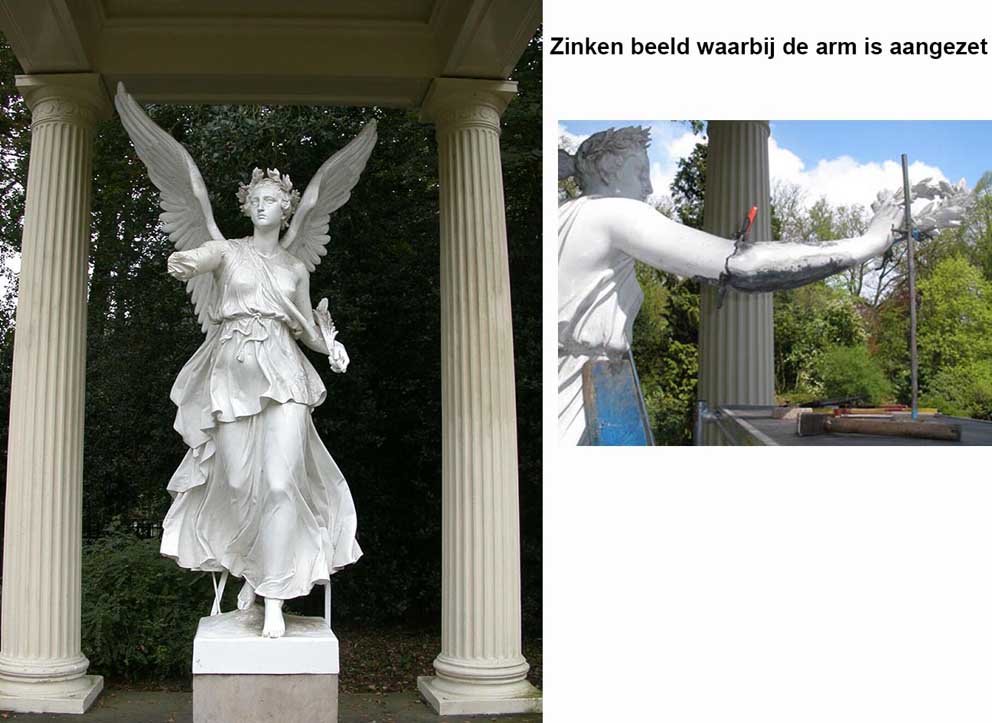 We basically restore all types of metal, such as this zinc garden statue, of which an arm had been broken off.

Thanks to regular projects involving jewellery conservation at the Nederlands Openluchtmuseum, Vivianne has developed a specialism of (peasant) jewellery. She is also a specialist in jewellery management and conservation for museums. 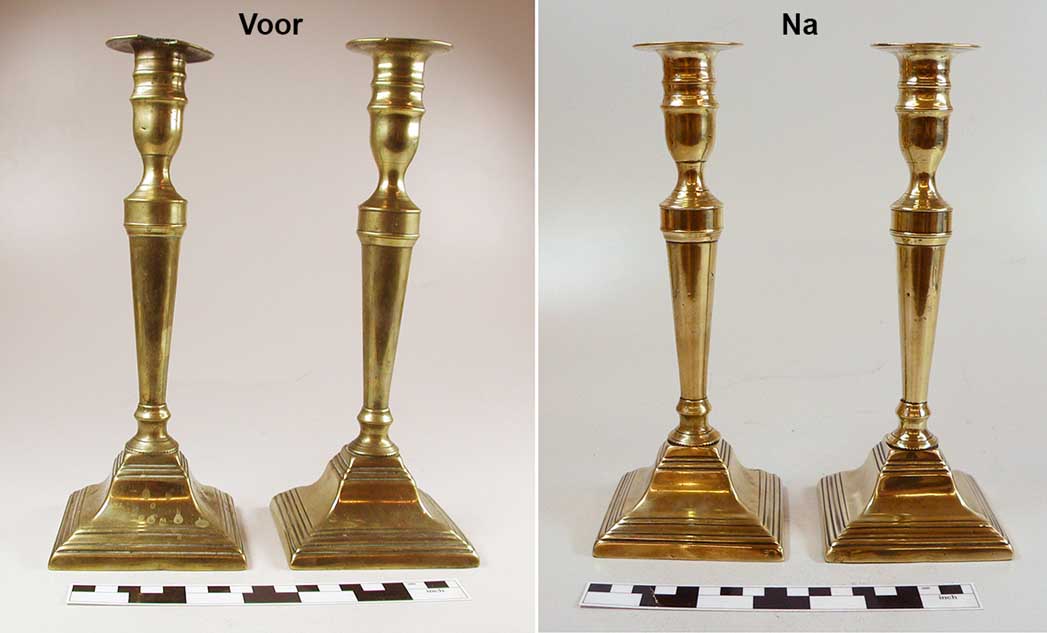 We are happy to straighten, remove dents or perform any other form of restoration on your beloved objects.

Ask for a Quote

When an object needs to be restored, you can contact us for an initial estimate for the necessary work. We then make a binding quote, which we do not depart from, unless the final amount is lower or more work has to be done than was previously agreed. This will always be done in consultation with the client. You will therefore never be unsure about the costs.

A selection of our clients

We also regularly carry out projects for private clients. 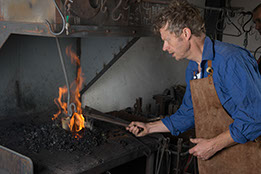 This year we hope to start workshops in bronze casting 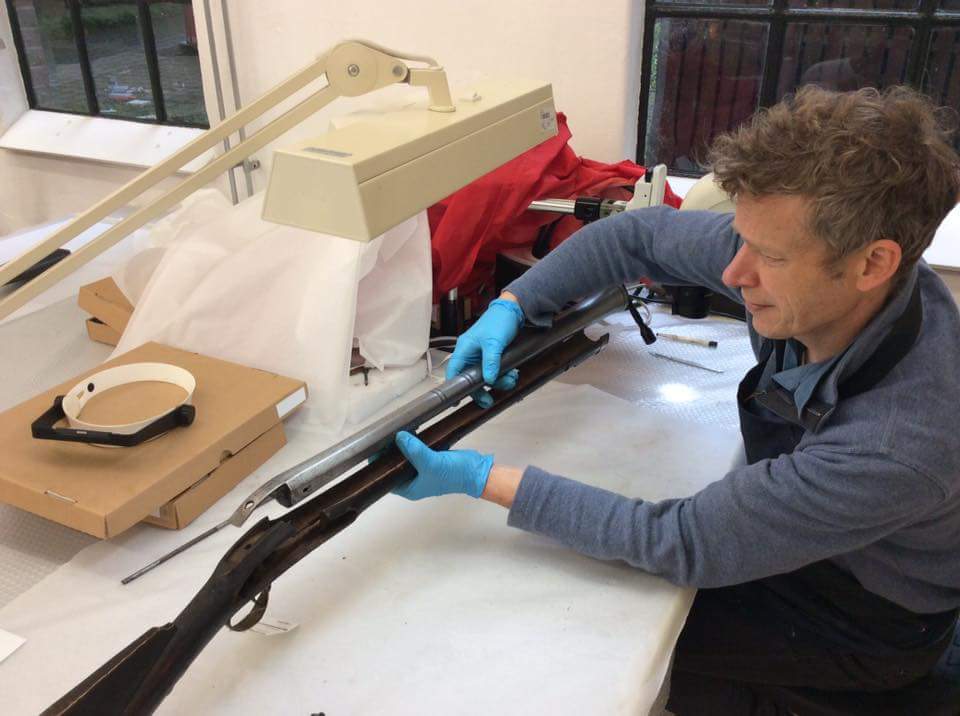 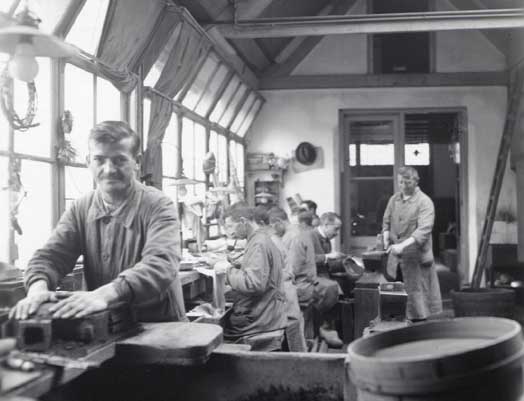 A lecture on the makers of peasant jewellery 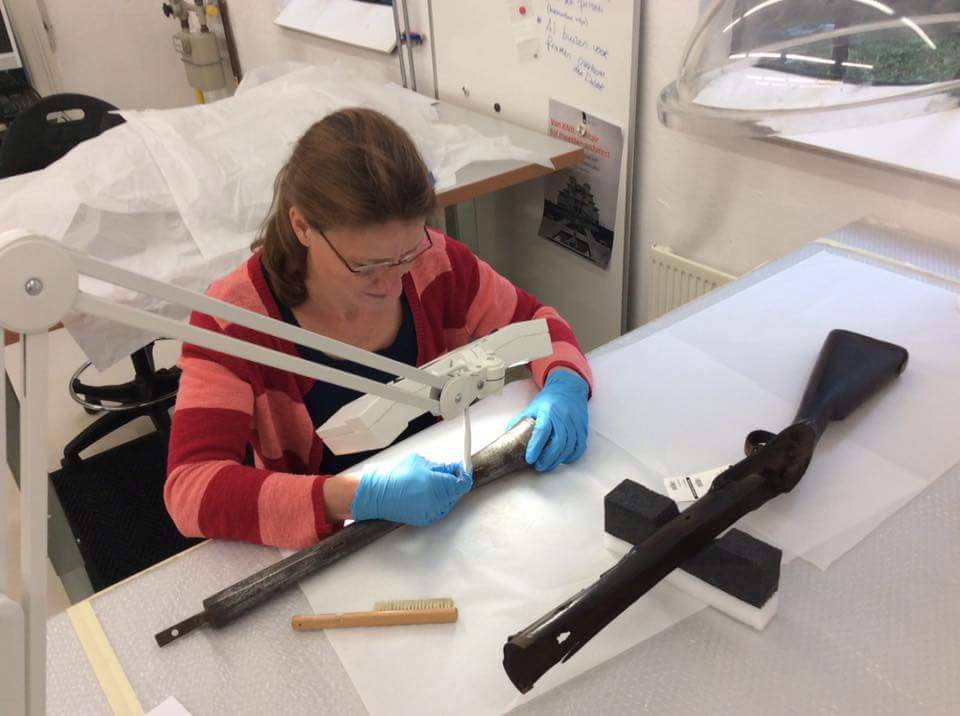 We finished a large project conserving fire arms of the collection of museum Bronbeek.